While the visual associations with Jacob Riis’s famous series How the Other Half Lives are inevitable, artist Robyn Hasty ambitious new photo essay using the wet-plate collodion process is very very different. Titled “Homeland,” Hasty’s current project aims to document grassroots efforts to rebuild and re-envision life after the collapse of the American economy a few years ago.

Don’t expect this series to be an exploration of poverty as the young artist sees great social potential in these American visionaries that live in cities, farms, and almost anywhere you can imagine.

“I’m trying to take a community is disparate and fragmented and give it a sense of unity. I see a solidarity of purpose and ideas that connect these people. I want people to realize that there are alternatives to their reality and I want to give sense of hope and promise in a social climate that is adverse to that,” she says.

Hasty is no stranger to life on the margins, she has worked for years as the respected street artist Imminent Disaster and on Swoon’s Swimming Cities project, but with her latest initiative she plans to show “how mass social change is possible through small, independent acts.”

As part of the undertaking, she plans to travel to a number of cities filled with pockets of overlooked citizens, including New Orleans, Detroit, Pittsburgh and New York. She will also be documenting many smaller towns and rural areas in between. Her research and travels have already taken to her to urban farms, bicycle collectives, off-the grid homes, alternative fuel producers, art and theatre collectives, community dinners, free schools and after-school programs, squats, itinerants, tent cities and many other grassroots social practices. 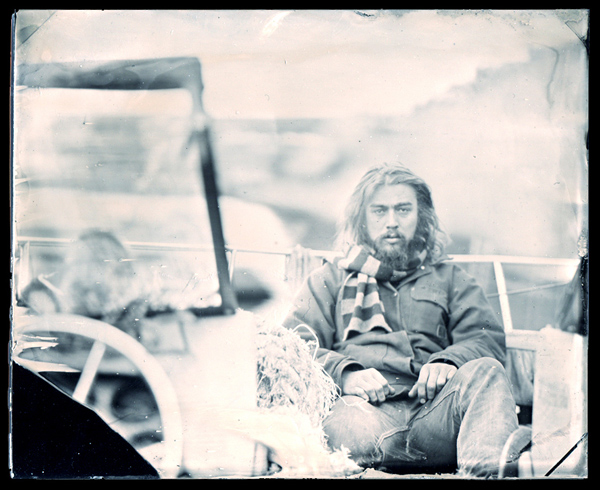 She is only $1,340 away from her $5,000 goal, which will allow her to fund the complete cross-country portion of the project and cover the travel expenses and materials for over 20,000 miles of travel and shooting (she obviously plans to travel cheap and sleep on the couches).

For “Homeland” she has decided to use the wet-plate collodion photographic process, which is related to the better known daguerrotype process. A difficult but hauntingly lovely process, wet-plate photography requires a portable dark-room, chemicals and a large-format camera to shoot in the field. The artist explains that she chose the medium for the project because:

of its exceptional material beauty, and because it mirrors a pattern of obsolescence and revival suggested by the subjects being photographed. The limitations of the antique view camera and the long exposure times lend themselves to a directness and simplicity of composition, while the materiality of the process leaves no question in the viewers’ mind about the honesty of the photographer: there is no digital manipulation, only the interaction of light and chemicals. All of these formal decisions help to support an underlaying vision of hopefulness and sincerity.

How can you help her? SUPPORT HER PROJECT BY MAKING A DONATION AT KICKSTARTER

The Turner Prize Wrestles With an Identity Crisis

How does a selective competition fit with the contemporary art world’s aspirations toward greater inclusivity?

Where’s the Art in the AP African American Studies Curriculum?

Critical race theory, which has been attacked by conservative lawmakers, is conspicuously absent, as are many contemporary and living Black artists.

Ten awardees will receive a total of more than $1.95 million in support and resources in Tulsa, Oklahoma.

Who Gets to Honor Native Women in the US?

“Dignity of Earth and Sky,” unveiled in 2016, raises questions about who should depict Native people and how they should be portrayed.

In this online exhibition, Indigenous artists reclaim realities long denied them by US and Canadian federal governments — including moments of collective reverie.

The Women Who Dominated This Year’s Sundance

At this year’s Sundance International Film Festival, more than half the feature-length movies were made by directors who identify as women.

Is Making Art a Way of Telling People to Go Away Forever?

In her novel Tell Me I’m an Artist, Chelsea Martin questions whether art offers a refuge from the world.

Call for Applications: Inspiration Lab Artists-in-Residence at University of the Arts

Ten artists will receive studio space and access to faculty, staff, students, workshops, and programming at an arts institution in the heart of Philadelphia.

Art by Guantánamo Detainees Can Now Be Released

The US government has lifted a Trump-era ban that kept formerly imprisoned people from accessing their works.

A work of art will be on the line when the Philadelphia Eagles play the Kansas City Chiefs this Sunday.

The media artworks in this show at Toronto’s OCAD University tell a tale of symbiosis, intersections, and more-than-human relationality.

How an LA Football Stadium Became a Home for Art

War, Bloodshed, and the German Grotesque

The works that best exemplify a uniquely German grotesque in Reexamining the Grotesque are those that reflect the war and Weimar years.

Hrag Vartanian is editor-in-chief and co-founder of Hyperallergic. You can follow him at @hragv. More by Hrag Vartanian

2 replies on “After the Financial Collapse, Help Support a Fascinating New Photo Project”